A Technicolored Extravaganza…
On Saturday, I was lucky enough to watch the Wight Strollers production of Joseph and the Amazing Technicolor Dreamcoat.

It’s no secret that I’m slightly critical when it comes to this particular musical. After all, Joseph and the Amazing Technicolor Dreamcoat has held a special place in my heart ever since I donned my scraggly black wig and pranced around as an Egyptian girl for Brighstone Primary School’s amateur production. The Wight Strollers, therefore, had the difficult job of not only impressing my adult self—but also my eight-year-old inner child.

Despite being almost 40 years old, Joseph remains just as popular today as it was decades ago. The musical is a Bible story which is bursting to the brim with light-hearted satire, catchy show tunes and a variety of different musical styles almost as great as the number of colours on Joseph’s iconic technicolored coat.

Thankfully, the Wight Stroller’s production of Joseph did not disappoint. Visually stunning and vocally impressive, Joseph was a treat to the eyes and ears from curtain up to curtain down.

With a stunning array of different colours, gigantic staircase, and an impressive Egyptian painted backdrop, it was clear that the Wight Strollers had pulled out all of the stops for their first musical.

Amazingly, their technicolored dreamcoat contained over 150 different colours, each of which had been painstakingly stitched together by talented seamstress Geraldine Tulloch.
For anyone who doesn’t know, Joseph and the Amazing Technicolor Dreamcoat tells the story of Joseph, the 12th and most favoured son of Jacob, who is sold into slavery by his jealous brothers.
Slipping into that famous coat and filling the title role was 25-year-old Nick Weightman, who added a charming and endearing innocence to the part of Joseph. A real highlight was Joseph’s slapstick lipstick lush love-scene with Potiphar’s wife, who was played by the stunning Beth Batchelor. And John Woodford’s horrified reaction, as Egyptian millionaire Potiphar, was just as priceless.

Nick Weightman singing Close Every Door to Me
Nick’s deliverance of the musical’s most iconic and chillingly captivating Close Every Door to Me solo was almost hauntingly beautiful at times.
While the show focuses predominantly on Joseph, it’s the Narrator who barely has a chance to draw breath throughout the production. Since the Narrator seldom leaves the stage and sings in virtually every song, any actress playing the part has the monumental task of regaling the tale energetically in a variety of different musical styles—whilst still interacting with the cast.

Emily Scotcher played the part of Narrator perfectly; rattling off song after song with ease as she effortlessly led us through the story of Joseph.
A hush descended upon the audience from the moment Emily opened her mouth; her powerful voice reaching the furthest corners of the theatre and sending shivers down the spines of the enraptured audience.
From concealing Joseph from sight as he attempted to wave a white flag at his brothers, to failed attempts at cheerleading, Emily Scotcher ensured the audience was never short of chuckles when she was onstage. 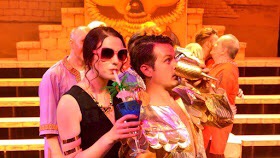 Brad Barnley also impressed with his strong voice and extensive vocal range as the Elvis-inspired Pharaoh, leaving the audience in stitches as he gyrated and thrusted through each song. His futile attempt to regain the adoration of the Egyptian girls from Joseph in Stone the Crows was extremely amusing.

The ensemble cast and chorus—complete with delightful children’s choir—delivered an energetic and seamless production. And there was plenty of tongue in cheek humour with giant inflatable bananas and stretchable prison cell bars.
Adding to the strength of the production were all of the well-known favourites, like Any Dream Will Do and One More Angel in Heaven, which were backed by the lovely chorus and children’s choir. Musical Director Kim Ball did a magnificent job of arranging the music and the live band made the atmosphere electric.
The musical was expertly directed and co-produced by Sarah Scotcher, who had clearly dedicated a lot of time into creating a faultless production. Sarah also had a cameo role as the doomed Butler, in what was one of my favourite moments in the entire play.
A quartet of talented young dancers were on hand to provide extra glitz, glam, and magic to the exceptional show. A special mention must be made to Cheryl Rudd, who choreographed some excellent dance sequences—especially during Those Canaan Days, when Izzy Rudd paired up with the depressed French-clad brothers.

The eleven brothers provided light-hearted relief and a good dose of satire in One More Angel in Heaven, as they broke the news of Jo’s “demise” to their grief-stricken father. Brian Whitewood played the part of distraught Jacob convincingly, and his devastation was perfectly offset by the brothers exaggeratedly wiping at their dry eyes with handkerchiefs.
A real highlight was the catchy Jamaican-inspired Benjamin Calypso song, which saw Michael Mullin, as Judah, take to the stage to proclaim Benjamin’s innocence. In particular, his energetic ‘yellow bird’ wing-flapping had the audience howling with laughter.
The show was polished to perfection, easily rivalling many of the professional musicals seen at places like the Mayflower Theatre—and arguably even the West End.
From the moment the curtain went up, all eyes were glued to the stage. Joseph was so mesmerising and absorbing that time flew-by, and the curtain calls came only too quickly.

After the final scene, the cast had the entire audience clapping and singing their way through a medley of songs from the show. As the show drew to a close, the cast and crew received a well-deserved standing ovation from the enamoured audience. On the whole, an impeccable production well-worth the bargain £10 ticket!