I was curious to see how some of my favourite tales from childhood, Rudyard Kipling’s ‘Jungle Book’ stories, could be transformed into a pantomime. And transformed it was, by writer and director Cheryl May. 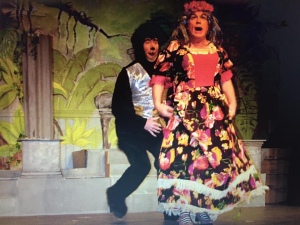 There were the familiar characters of Mowgli, his adoptive wolf pack, Baloo, Bagheera and Kaa, not to mention the arch villain Shere Khan. But a pantomime demands a panto dame, hence the appearance of Mowgli’s birth mother Jane, hilariously played by Steve Taverner, who informed us she was also Tarzan’s widow and was searching the jungle for her son – and, it seemed, for a new husband. We had a very pretty Blue Peacock (Kirstine Davies) as a narrator, and the tradition panto comedy duo was supplied by Chitter and Chatter, played by Lewis Gadsby and Jack Williams, always monkeying around – cue for a song anyone?

In fact, the constant shoe-horning of songs, sometimes very briefly into the show, while amusing, detracted from the plot and at times seemed unnecessary. That said, the standard of singing was generally good and the full set pieces were beautifully danced – choreographer Pat Suttman is to be congratulated.

Although there were several adult main actors, this panto really came across as for children to perform and enjoy, and indeed the younger members of the audience had great opportunities, which they took up with glee, to indulge in the traditional ‘it’s behind you’, ‘oh yes he did’ calls so beloved of panto-goers everywhere. 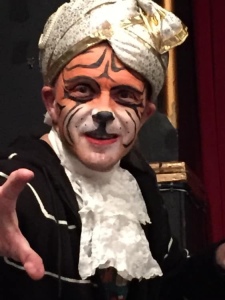 The audience were also in fine voice booing Shere Khan, played with aplomb by an unrecognisable Pete Harris. His sidekicks were also effective, both in nastiness and in appearance. In fact the costumes for the whole cast were delightful – colourful and inventive, and each clearly depicting the animal, whether lion, wolf or elephant. Well done to costumiers Liz Santer and Peter Blackburn!

The best moments however were the full chorus numbers when all cast members, young and, er, not so young, came together to showcase their singing and dancing talents.

Buy tickets online at www.caods.org.uk or call the box office 295229.