REVIEW: Into The Woods – Christ The King College

This was the first time I’ve seen anything from Christ The King (CTK) so I did not know what to expect, however being a fan of Into The Woods (and someone that wants to put it on in the future) I had high hopes and expectations.

The show was staged very well.  Comprised of three platforms it gave a nice element of levels to the performance. There was a small area for projection which was used well to show the Giant and the sky and there was a very creative way to show Cinderella’s Mother’s Tree; which was done with a rail and a collection of umbrellas with vines on a pulley system. The only downside was the bark on the stage, which although gave a nice effect, had to be dodged from time to time as it flew off the stage and into the audience.  It also had an aroma to it which suggested it was new bark, but I quickly adapted to that and enjoyed the show regardless.

I was surprised by the standard of performance as you often find that school productions struggle to find enough cast with acting talent, let alone the ability to sing; especially with the difficulty that some of the songs in this musical possess, but everyone, even those who seemed less confident, blew me away.

Nathan Stubbings as Jack, was very good.  He fitted the part well and looked like he enjoyed playing it, which I like to see when watching theatre.  There was a moment, after his onstage mum had died, where we were close to seeing real tears from him. This was something else I loved about him, he was equally as tear jerking as he was funny and it showed real talent at conveying a range of emotion. His mother, played by the incredible Olivia Garner, was how I’ve always imagined Jack’s Mother to be in this production.  She was the perfect mix of caring and head strong and was also very funny.  I find comedy is quite hard to pull off on stage without sacrificing the quality of acting, but Olivia pulled this off perfectly. Special mention should go to Helene Jeugens and Leah Blair who played their pet cow, Milky White, often underrated but not easy to make a cow’s head look so alive. I believe they also puppeteered the birds which was also done well.

Katharine Burton was diamond casting for Little Red Riding Hood, her personality was really woven into the character and made for some truly great and funny moments on stage. It really did feel so natural and innocent while at the same time being so cheeky.

Ben Baker, playing The Baker, was perhaps my favourite highlight overall.  Although seeming quite nervous to start with, he quickly gained confidence and gave an incredible performance which got better as we went through the show. Jasmine Brooks played his wife and she was astounding. She was great at singing, great at acting and so ridiculously funny. Annie Sussman played the witch and other than the cheesy witch nose, was brilliant.  She really was evil and her shrill scream and cackle set the perfect mood onstage. She was particularly good at being remorseful when she was transformed into her ordinary self. Her daughter, Rapunzel, was played by Holly Foskett in a strangely erratic way that really gave a sense of being locked in a tower for a long time.  If that’s what they were going for, then it was a very creative interpretation of the character, which I particularly enjoyed.  It was perfectly uncomfortable to watch, in the best way possible.

Charlie Doorbar and Rees Cooper played Cinderella’s Prince and Rapunzel’s Prince respectively and were a great comedy pairing on stage. It was clear that they were less confident with the singing, which they used to their advantage, channelling a sort of Westlife-esque approach to their songs. What pleased me most about them however was their invisible horse routines and their chemistry as a pair. Cinderella’s Prince was assisted by his steward, slightly overplayed by Nico Voigtmann, who I felt was giving a bit too much.  His performance as the wolf however, was perfect. It was creepy and disturbing to watch which is exactly how the wolf should be and Nico really knew how to work the stage in that scene, in fact, him and Katharine(LRRH) worked incredibly well together in that scene. 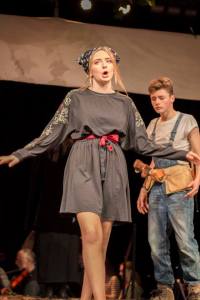 Yasmin Humphreys played the narrator and had the character down to a tee.  It was let down by needing her lines onstage, but this was made to look like she was recalling the story so did just about work for me; regardless, she was very good in the role. Miss Shyvers played the giant and was great at getting the angry tone across with the help of some voice distortion.  I really enjoyed the way in which they showed the giant though the projection of just the eyes. Jake Bushnell played the Mysterious man, who was, well, mysterious. Jake did well at making the character cryptic and was very clear and loud.

Laura Jones and Hollie Dunstan were ‘ugly sisters’ Florinda and Lucinda.  They were very entertaining to watch, perfectly evil, perfectly funny and brilliantly blind and grovely at the end.  Their mother, Cinderella’s Stepmother, played by Faith Bampton, was also good, albeit a bit quiet at most points.

Cinderella’s Mother was played by Hannah Knowles whose voice was beautiful in a part that is very tricky for the best of singers, and she nailed it, It was like they had cast two Cinderellas, which I think was a clever move. Cinderella however, was actually played by Joella Maddin who suited the part very well.  She was another who was good at both singing and acting and had a particularly great moment at the end with The Baker, LRRH and Jack as they came together.

Ms Reed-Birks, Mr Gray, Mrs Downer and Mr Thompson did a fantastic job of directing/coordinating the show. James Cooper’s lighting designs were always perfect for the scenes and the rest of the crew had clearly put so much effort into the show. A massive well done to all of the Orchestra, who played a rather difficult score, incredibly well my only wish would have been that the cast were a bit louder as they were occasionally drowned out by the music.

Overall I really enjoyed the production and look forward to seeing what CTK produce next.

A final congratulations to all of the cast and crew and thank you for an enjoyable evening.