The definition of an ‘ensemble show’ must surely be Andrew Lloyd Webber’s Cats, and Ventnor Theatre Group’s production of this iconic 1980’s musical certainly followed this trend. Based on T.S. Eliot’s Old Possum’s Book of Practical Cats, it’s wordy, tricky and packed with nonsensical language – there’s not much of a story, but then the story was never meant to be the focus!

Their ensemble was high-energy and high-volume, with each cat being given a chance to shine, particularly at ‘The Jellicle Ball’, a number entirely danced, with the cats leaping and prancing across the stage in smaller groups, every one of them hurling themselves into the suitably feline choreography. The make-up, wigs and costumes were absolutely fantastic, and the cast must be applauded for their animation and dedication to character, no mean feat when so much of the show takes place at audience level, within mere inches of the front row! 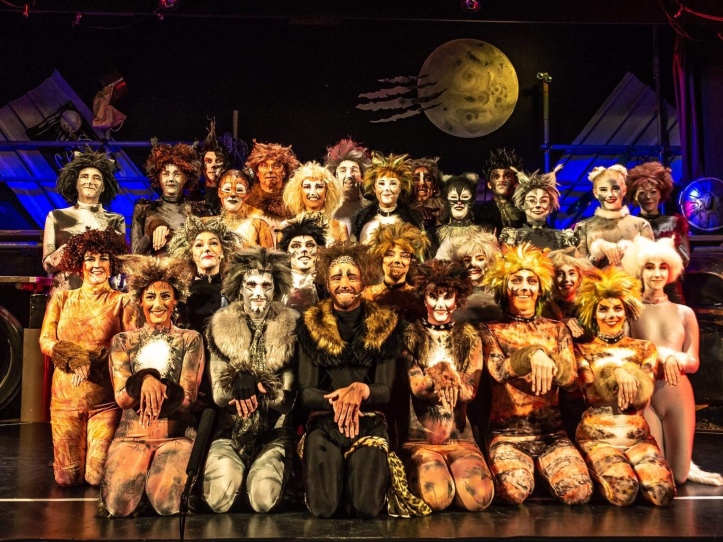 Brad Barnley as Rum Tum Tugger commanded the stage, and the affection of his fellow cats, with ease and was suitably cocky. Featured in ‘The Rum Tum Tugger’ and in ‘Mister Mistoffelees’, his vocals – as ever – were superb.

Matt Rawlings as Munkustrap gave a solid performance throughout, but he was particularly impressive in ‘The Aweful Battle of the Pekes and the Pollicles’ (incidentally, look out for Rum Tum Tugger in that one!), deftly handling tongue-twisting lyrics and tricky phrasing. Hopefully we’ll see much more of Matt on the Island’s stages – he’s one to watch!

Two more exceptional performances came from Michael Mullin and Katharine Burton as Mungojerrie and Rumpleteazer respectively, both bringing mischief in abundance to the Jellicle Ball proceedings with their vibrant characterisation, never out of character for so much as a beat and delivering every word, kick and flip with real pizzazz.

John Kerr was in his element as Skimbleshanks and led a catchy number in which parts of the set were cleverly utilised to build a makeshift train; Jamie Mallon as Mister Mistoffelees and Rhiannon Taylor as Victoria brought an air of classy elegance to the Jellicle crew; Lisa-Maria Saidinayar and Francesca Toyne as Demeter and Bombularina demonstrated beautiful vocal tones in arguably one of the best-known numbers in the show, ‘Macavity the Mystery Cat’; and Bobby Oddy as Jennyanydots was on form in both ‘The Old Gumbie Cat’ and ‘Bustopher Jones’.

A particular highlight came in Act II, and this was the fight scene between the villainous feline Macavity (played by Michael Mullin), Rum Tum Tugger, Old Deuteronomy and Munkustrap – it was fabulously acrobatic and exceptionally well-executed by all involved.

Amanda Barnley fully immersed herself in the role of Grizabella the Glamour Cat, and it was lovely to see her playing out the shunned cat’s journey to redemption. Particularly touching was her closing moment in Act I with Steve Jones as Old Deuteronomy, who it’s safe to say utterly knocked his role out of the park!

At this point, a shout-out must also go to Ashleigh Hunt-Davis as Jemima. The brief duet between Jemima and Grizabella was beautifully staged, with Jemima elevated above the older cat and the pair singing an octave apart. A gorgeous moment.

But perhaps the most profound of the show’s numbers, at least for this reviewer, was ‘Gus: The Theatre Cat’. I have seen both Paul Stevens and Sharon Lock in many productions, and it’s safe to say that both were on absolutely top form in their roles as Gus and Jellylorum. Not lauded as one of the shows ‘hits’, it came as something of a surprise to find that it was the one I was humming as I left. It was deeply affecting, simply staged and not performed but lived.

There were so many named and unnamed cats that it’s nigh impossible to mention them all (although I have tried!), especially as some teething issues with the sound made it difficult to hear many of the cats’ introductions in Act I. The cast, however, took this in their stride and I have no doubt that these will be ironed out by opening night!

Alongside the cast, the crew deserve a mention for their commitment to ensuring that this production was as authentically and effectively staged as possible; the set was brilliant, and afforded the cast numerous creative entrances and exits. Similarly, the band were – as always in Island musicals, it seems, as we are exceptionally lucky with the number of talented musicians who call the Island home! – spot-on with every musical nuance and unusual time signature…if memory serves, Cats has a number of challenges within its score, including a brief foray into 13/8!

All in all, for Lloyd-Webber aficionados this is a must-see for the Bank Holiday weekend; and if you’ve never heard of Cats, go along and support these felines and treat yourself to a first viewing of one of the longest-running musicals in history – but be quick, as there aren’t many tickets left! 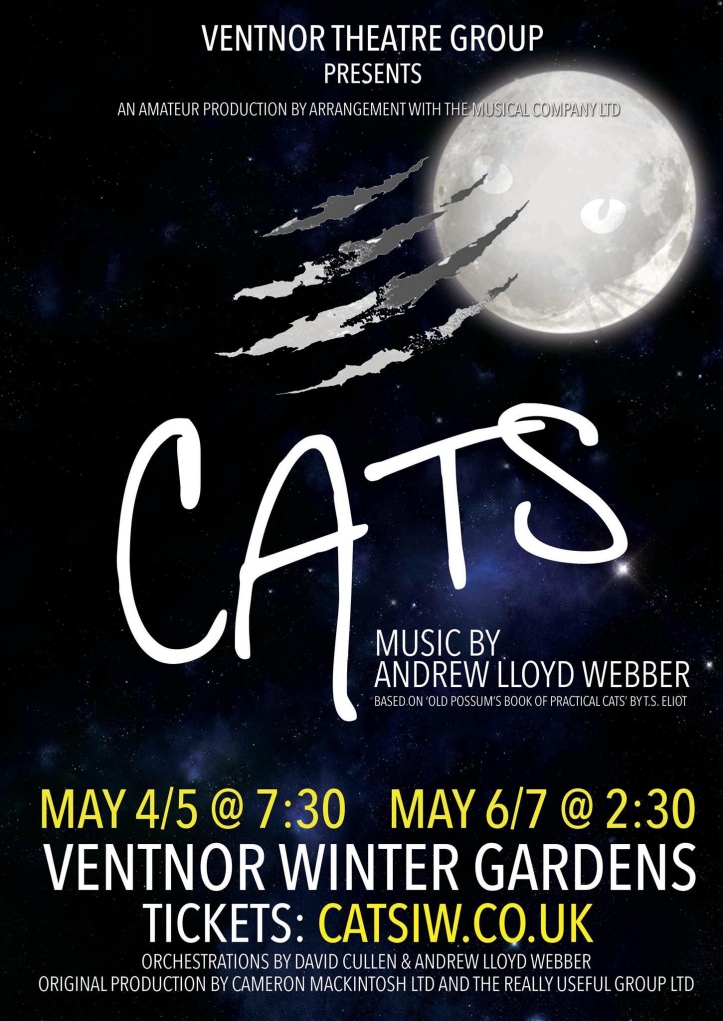