Witty banter and slapstick comedy were the order of the weekend at Carisbrooke Castle on May 19th and 20th, courtesy of a collective of actors from across the Island; last year, they produced and performed The Merry Wives of Windsor and this year’s offering was one of Shakespeare’s best-loved comedies, Much Ado About Nothing.

Much Ado is primarily the tale of two warring wits in Beatrice and Benedick, whose apparent hatred of each other is about as convincing as Benedick’s hat-and-broom disguise; they clearly love each other from the word ‘go’, or rather they love to bicker and squabble and test their minds against one another.

Jason Harris and Maria Wilkinson were perfectly cast. Jason was both sweet and sarcastic, both brilliantly funny and face-palmingly hopeless – a bright star indeed on the stage, and matched by Maria Wilkinson, blow for blow, as the feisty Beatrice. The pair danced back and forth, giving stand-out performances , and there was a sense of genuine happiness not just on stage but in the audience when Beatrice and Benedick finally made a match.

Simon Lynch as Don Pedro was inspired, with charisma rolling from his every word and his jovial approach to the leader making his later transformation to cold disdain all the more effective, whilst Robbie Gwinnett made a superb Claudio, taking a character too often swept aside as bland and making him not only likable but exceptionally entertaining. His impression of Maria Wilkinson’s Beatrice was a particular highlight!

Hannah Brewer as Hero was another who made her part meatier than the script would suggest at first glance; her very real tears during her ruined wedding demonstrated her excellent range, especially when contrasted with her scene in the orchard, ably supported by Lucy Benton as Margaret. Maureen Sullivan as Hero’s mother, Leonata, was another strong character, and how fast she turned on her wronged daughter was both unsettling and effective.

Olly Fry as Don John was a frosty and undeniably creepy villain. Something like a cross between BlackAdder and Jafar, he trod the line between calculating and hapless really rather well. His plans, whilst cunning, were always set to be foiled and perhaps his best plan – one in which he would sabotage a wedding, a maiden’s honour and his brother, all in one day – was not even authored by him but by his sidekick, Borachio!

Patrick Barry’s turn as Borachio was memorable, and his repentance for his part in the plot was a surprisingly sympathetic moment – the audience really felt for him. Assisted by Gail Knappett as Conrade, the drunken scene in which they give the game away to the local watch was another high spot.

The cast was rounded out by yet more Island talent: Paul Stevens as the utterly useless Dogberry was a hoot, as was Abbi Leverton as his straight-laced underling Verges. Tia Jackson took on two roles as both Ursula and the Guard, Carole Crow was hilarious (and yet terrifying!) as the sword-wielding Antonia, and Glenys Lloyd-Williams proved that you don’t need a large role to make an impact in a thoroughly engaging turn as the Abbess. 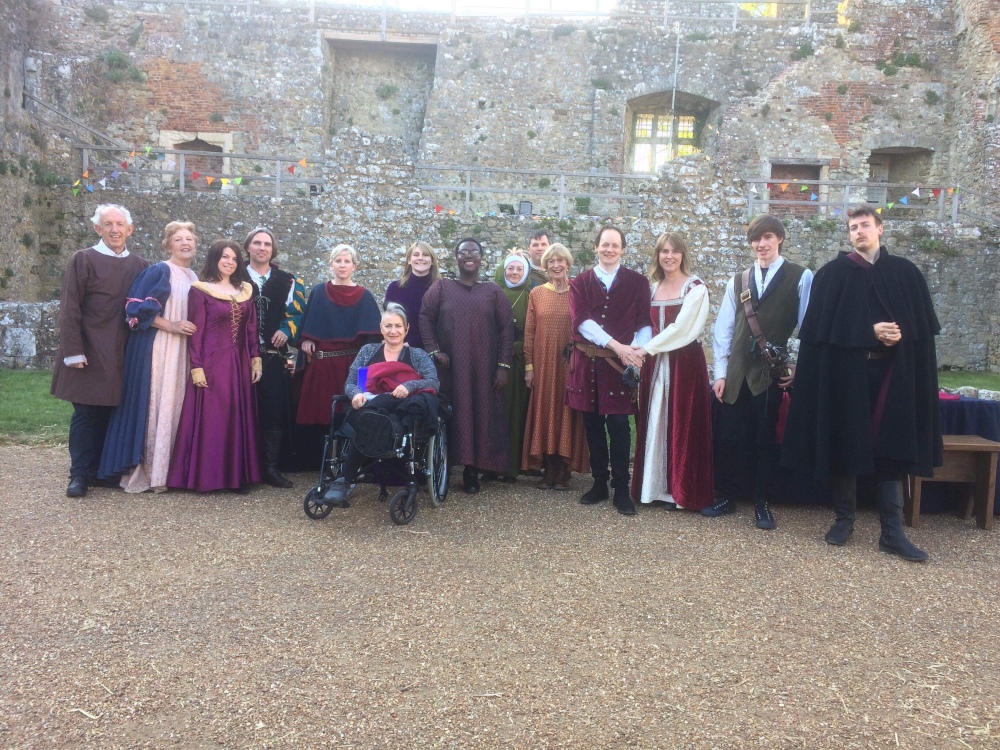 This production was written to be laughed at, it’s one of Shakespeare’s cleverest comedic works with scope for puns and physicality and innuendo at every turn, and Director Maureen Sullivan ensured that no gag went unheeded. And the audience was with her and her cast every step of the way.

Carisbrooke Castle is a theatrical setting in itself, and to stage plays within its walls seems somehow right, like it should always have been this way – the feeling of being thrown back in time is a welcome tonic in a world where rushing about seems to be the order of every day, hour, minute.

And not only did the castle enhance this productions, but the production enhanced the castle in return: the laughter of a live audience and the revels of the performers added a little extra sparkle to what is already the Island’s most majestic gem.

Simply set, costumed in period garb and played at every turn for laughs, this production was truly a breath of fresh air on a warm summer’s night, made all the more enjoyable by the setting, the hospitality and the exceptional refreshments offered by English Heritage; long may such events continue.