Postponed. Cancelled. Two words that were stamped across theatrical posters both professional and amateur alike as theatres across the world went dark. The Island was no exception. The Island Savoyards were three weeks from performing Kipps with a fully-rehearsed and ready-to-go cast; Bembridge Little Theatre Club were also mere weeks away from their production of Full Circle; Origins, Ventnor Theatre Group, The Apollo Players, the list goes on, and on, and on, and still continues to grow. My own personal experience of the journey into Theatrical Lockdown was with The Wight Strollers.

This year marks our fortieth anniversary. Forty years of pantomimes, with some variety shows, carnivals and musicals thrown in for good measure; forty years of giving our show proceeds away to Island charities and good causes; forty years of making a difference, and of bringing joy to both members and audiences alike… …And the celebrations have been cut short. It was the strangest committee meeting I have ever been to, and I’ve been to committee meetings where we’ve had a lifesize cut-out of the Queen stood in one corner, and to meetings where we’ve all sat wearing stylized black hats, and to meetings where we’ve passed the tea and biscuits over a papier maché giant’s head! But this was a different kind of strange. Theatrical productions were being felled from the Island’s calendar on an almost daily basis, and in spite of it being only March, and July seeming so very far away, we all walked into that meeting knowing deep down what the result would be for our summer musical, The Wind in the Willows. Seated on chairs spaced at two metre intervals in Shorwell Parish Hall, we spent the first few minutes in almost complete silence. What was there to say that nobody in the room didn’t already know? We had watched our friends in other groups have to postpone or cancel shows and our hearts had gone out to them, each in turn, and there was nothing we could do but watch it happen, with a sinking feeling we would be next. We performed our pantomime – Sleeping Beauty – in February, and it finished just a couple of weeks before the situation in the UK began to escalate. We were also lucky enough to perform in (and win!) a class at the IW Music, Dance and Drama Festival, and to have our after-show-party-meets-anniversary bash. It feels like a lifetime ago now… This month, we were due to present our panto proceeds to our chosen charities, start rehearsing for The Wind in the Willows, and set the wheels in motion for our 2020 carnival entry. At the time of our meeting, a full lockdown hadn’t been enforced…but it was coming down the track, fast. And so we agreed that The Wind in the Willows could not happen this July. 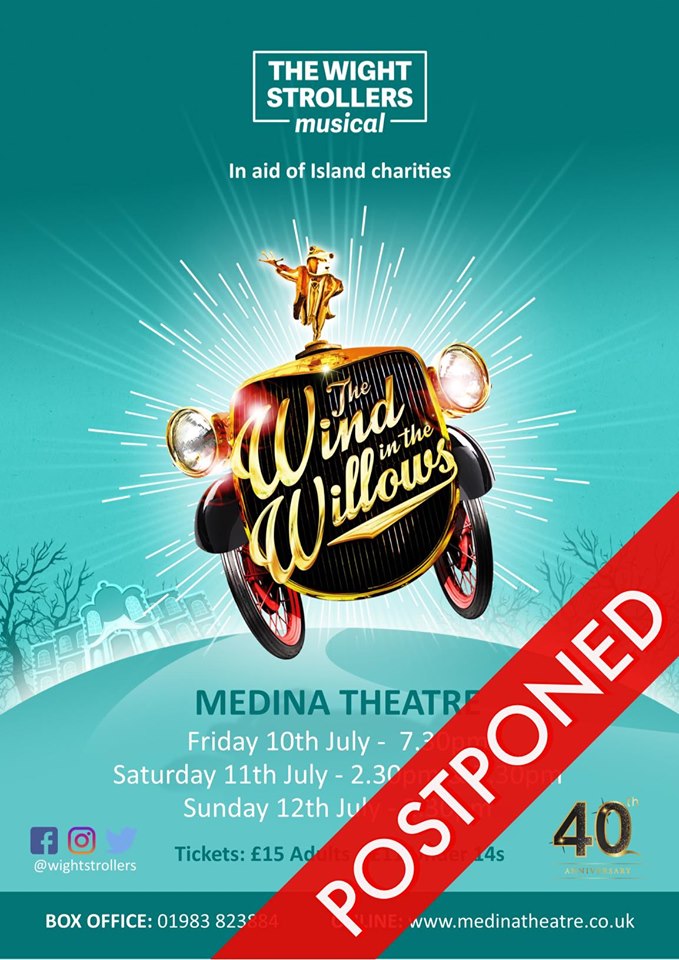 Along with so many other groups, and events, and venues…The Wight Strollers stamped ‘Postponed’ across their posters, and we all felt the sting. The licensing company for The Wind in the Willows, Theatrical Rights Worldwide, were amazing, as were Medina Theatre – I cannot speak highly enough of either, and we managed to secure new dates for July 16th-18th 2021. Thank goodness. We were also able at that meeting to commit to giving £8,000 to Island charities and good causes from our panto proceeds, with that figure including a tenth Public Access Defibrillator for the Island. Plus it was agreed that we would make an emergency additional donation to be paid immediately to the IW Food Bank. And we talked panto 2021…which was exciting! But our AGM was postponed indefinitely, and nor could we present our panto proceeds in the usual way, and nor could we hold our Charity Auction, Beetle Drive, Music Quiz, or start carnival preparations – all we could do, we realised, was await further developments and react accordingly. Unanimously, we agreed that if – when – the lockdown came, we would find a way to keep singing, to keep socialising, to keep together. We all departed without our usual tea and coffee, without Mike’s homemade bread pudding, without the usual hugs and kisses, without the call of ‘see you at rehearsal’ across the car park. Like I said, it was a strange meeting, and it left me an odd combination of elated and frustrated, proud and sad. One thing that was already clear, to all of us, was that the support and friendship theatre groups offer was arguably going to be more important than ever before…and it took only one look at Facebook when I got home to know that other groups were feeling exactly the same. After all, we as performers all know a theatre group’s value does not lie only in the final show it creates. It is somewhere to share a passion with a group of people that often spans generations, it’s somewhere to let off steam after a long day, it’s a chance to be someone else but at the same time to be yourself, it’s somewhere to create something special that will bring joy to so many hundreds of others, it’s a support network for members who need a place to go where they can leave their worries at the door…it’s all this, and so much more. So when the lights of theatre-land went out, and all these things were suddenly torn away without warning, we all feared we might be left sitting in darkness. But the ghost lights came on almost at once, and have been shining ever since, with theatre groups rallying to keep spirits high both inside and outside of their memberships, and even across groups. For our part, we’re trying to continue doing what we always set out to do as a company and make people smile: we’ve created our very own Lockdown singing video from our traditional panto finale song, as well as a make-up ‘transformation’ video, and we will shortly be restarting our blog, and hopefully getting a few more ideas underway as well over the coming weeks. Meanwhile, to keep our members together and raise their spirits in a time when we should have been seeing each other twice-weekly for rehearsals, we’ve been enjoying weekly quizzes on Zoom, held an Easter Bonnet competition, posed a Baby Photo competition, and released puzzle packs…and there’s plenty more still in the pipeline! Because at a time when people’s worlds might feel darker, scarier, their businesses and jobs and finances and relationships and futures perhaps less certain…we can still be something solid, something certain, something that isn’t going to go away just because we can’t all get together in our usual way. Because no matter how far-flung our members are, whether they’re isolated alone or with their whole family, whether they can take part in one Lockdown activity or all of them… Because no matter whether someone actively follows us on social media watches our video on a friend’s feed, or whether they’ve seen one show or twenty-one… …We’ll still be here, in whatever way we can, doing our very best to spread a little joy. When this all began, it was so easy to panic. Worry, frustration, sadness, confusion, I think it’s safe to say most people felt at least one of these things, if not all of them. It took time to get to grips with what was happening, to regroup, to come up with a plan. But now? We as a theatrical community, Island-wide, have adapted. We’ve found new ways to keep ourselves busy and entertained and together, so what when this ends – and it will end – we will come out of this stronger and more united than ever before, ready to raise the curtain once again. Because it’s not where you start…it’s where you finish. Emily Scotcher

This is the 5th in a series of “Raising The Curtain” posts, thank you Emily! If you would like to share an Island theatre story, to reminisce, let us know. We look forward to sharing your contributions.