REVIEW: The Loves Of Cass McGuire – The Apollo Players

The Loves of Cass McGuire

Last Night I had the opportunity to watch The Loves Of Cass McGuire at the Apollo Theatre. I’m not a regular in the audience at the Apollo so I was looking forward to seeing the high quality theatre that I had been assured they create. 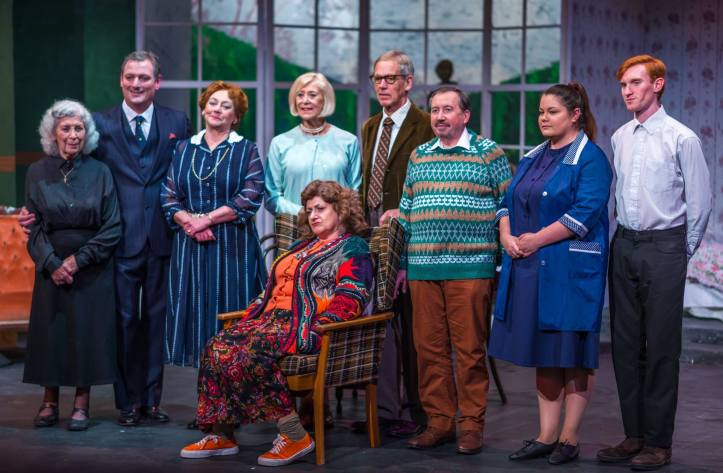 The stage looked absolutely amazing.  It’s been a while since I’ve seen a legitimate fixed set for a play on the Island, so ‘props’ to the production team there.  From reading the synopsis, I was curious to see what it all meant and how so many different personalities could work together on one stage. I was not disappointed.

Despite not featuring in the play that much, Mother was played by Cynara Crump quite well. She was particularly good at acting deaf and not reacting to the other actors or to what they were saying.  It was clear that her research had had an effect on the part. Andrew Butcher played Dom excitedly and really gave the audience a real sense of his journey. Occasionally things he would do would distract you from the other characters speaking which seemed unnecessary. Tessa was played by Ellen Lamplough-Birch, who was perfectly portraying the warmth and caring nature of a care-home nurse; she wasn’t too patronising and was nice to watch. Ginnie Orrey perfectly played the short appearance of Mrs Butcher. Mrs Butcher was a great contrast to the other care home residents, as well as being a great reflection of how Cass used to be. 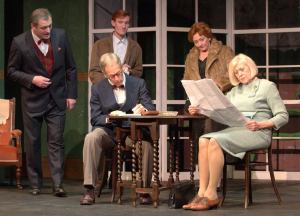 Graham Brown was particularly good at showing the different moods of Pat. He was someone who I really enjoyed watching as he was very animated and expelled huge amounts of character within his short bursts on stage. Trilbe, was played by Carole Crow in a way that reminded me of Helen Mirren. Carole has the most expressionate face of anyone I’ve ever watched on stage, which meant you could tell what Trilbe was thinking and feeling even when she wasn’t speaking. David Stradling was quite possibly my favourite as Mr Ingram. David is a very good storyteller and had amazing characterisation. I found myself laughing with every line he said where usually some lines would be lost, his all triumphed.

The last time I saw Stuart Egan, he was playing an hysterical farmer in Jack and The Beanstalk, this time, however, he was a soft and warm Harry. Stuart was perfect at conveying a father figure torn between his wife and his sister. In addition to all of that, he nailed the Irish accent as well. Stuart also had a great relationship with Glenys Lloyd Williams who played his wife Alice. Glenys was motherly and had really worked hard to understand her relationships with the other characters and despite a questionable Irish accent, was still a pleasure to watch.

But the Undeniable star of the show was Fiona Gwinnett as Cass McGuire. She was brilliant at portraying such a range of different personalities, sometimes she was funny, sometimes despicable and often surprisingly touching, and on occasion, brought tears to my eyes. The American twang on her accent really helped to give the sense of character and separation from the others and her parts that were directly to the audience were personal and intimate; I often felt as though she was looking right at me when she delivered them. The sheer brilliance of Fiona was clear from the vast number and length of the lines in which she had to deliver and how she managed to learn all of those is a true credit to her commitment to the show.

Not to be forgotten of course is director, Maureen Sullivan who I feel really pushed the limits in order to deliver a fantastic cast and a wonderful story by Brian Friel. Although the first half was slow to get moving, the second was absolutely perfect and had me gripped throughout and left me wanting to know more, especially about Dom and Mrs Butcher.

Overall, it was an enjoyable and touching piece of theatre which really resonated with me and would recommend it to anyone who can make the last showing tonight (1st Apr).