Carisbrooke Castle. The centrepiece of the Isle of Wight, an imposing figure atop a hill, overlooking the Island from coast to coast, steeped in history and drawing in crowds year-round with its captivating tales of those who lived and worked there…

One such figure was Sir George Carey.

He made many modifications to Carisbrooke Castle in his time there, improving the accommodation and strengthening the fortifications, and his connection to the castle is well-known, but rumour has it he had a lesser-known connection to an equally important piece of history: William Shakespeare.

The Merry Wives of Windsor is said to have been commissioned by Carey as the entertainment for the Order of the Garter Feast in 1597, to which is was invited, and it’s this connection that has inspired English Heritage to delve into the local theatre scene and stage the production in the castle grounds, outside the very ruins of Carey’s Mansion.

Directed by Maureen Sullivan, with Hannah Brewer as Assistant Director, the production features a wealth of local talent, faces well-known across the Island, drawn from a number of local companies and each bringing their skills, humour and style to the show to bring Shakespeare’s veritable feast of characters to life.

“I chose Shakespeare’s The Merry Wives of Windsor as this particular play has a strong connection with Carisbrooke Castle,” says Hannah Brewer. “The Lord Chamberlain’s men was founded under the patronage of Sir George Carey’s father – Sir Henry Carey – who took charge of court entertainments. On his death, the company briefly become The Lord Hunsdon’s men until Sir George himself took up position of Lord Chamberlain. The Lord Chamberlain’s men would go on to incubate the talents of William Shakespeare and held exclusive rights to perform his material…later, King James I would become patron of the company, earning them the name The King’s Men.”

Maureen Sullivan adds: “When Elizabeth I watched Henry IV she loved the character Falstaff – a hilariously self-deluding ageing drinker and womaniser. So much so that when he was killed off in Henry V she allegedly asked Shakespeare to bring him back to life!”

Maureen herself has connections with Falstaff, having played the role a few years ago, and was fond of the character from the moment she donned the padding and picked up a pint of sac!

“I snapped up the chance to act the role of Falstaff in the history plays,” she says. “And I couldn’t pass up the opportunity to direct this vehicle for his reincarnation, especially in the amazing grounds of Carisbrooke Castle. We have gone for a traditional staging, letting the surroundings, the larger than life characters and Shakespeare’s comedy speak for themselves.”

In this production of The Merry Wives of Windsor, Paul Stevens takes centre stage as Sir John Falstaff, an ageing knight with a penchant for wine, women and mischief. He, in his usual flirtatious way, is attempting to woo two woman at once: Mistress Page (Maria Wilkinson) and Mistress Ford (Fiona Gwinnett), both of whom are happily married…and keen to make a fool of Falstaff.

With the help of local gossip Mistress Quickly (Emily Scotcher), they set about convincing Falstaff he’s in with a chance at winning their affections, leading him on a merry dance towards his ultimate humiliation.

Madness, understandably, ensues as Mistress Ford’s jealous husband, Master Ford (Paul Gwinnett), starts to suspect that he’s the one being cuckolded and makes repeated attempts to catch Falstaff in his house, without success.

Meanwhile, Mistress Page and her husband (John Abraham) are warring over who should be allowed to marry their daughter, Anne (Katie Gibson): multiple men are courting her, and each parent favours a different suitor, whilst Anne favours another. Between the wacky Dr Caius (Patrick Barry), the ditzy Slender (Nye Russell-Thompson) and the dashing Fenton (Joe Groves), there is yet more hilarity as the battle to win Anne’s hand advances.

There is no doubt that the production is enhanced by its venue, and for Hannah, in particular, the production has more significance than just its historical ties with the castle. Passionate about both history and the Bard, Hannah has always been keen to utilise the unique surroundings at Carisbrooke Castle for theatrical purposes:

“Having worked at Carisbrooke Castle since 2015, I have always believed in its potential as a venue for theatre,” she says. “The castle naturally lends itself as the perfect backdrop to classical theatre. I was delighted when I was given permission to organise the production, and I have been incredibly fortunate to have found such a brilliant director and talented cast.

“I would like to thank everyone involved for their dedication and passion for the project,” she adds. “I would also like to thank English Heritage for the opportunity, especially Amanda Pickard, our property manager, who will be assuming the role of Elizabeth I for the show!”

“I hope this production will springboard a new wave of enthusiasm for theatre in historical settings. We hope to inspire as much as we intend to entertain.”

And with such a fabulous venue, entertaining script and hilarious cast, this production is sure to do exactly that! 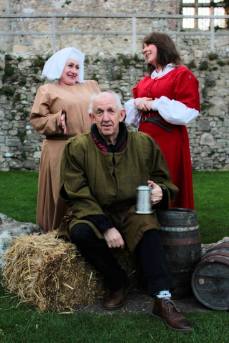 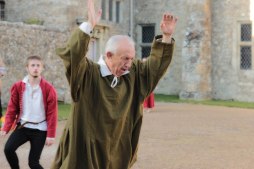 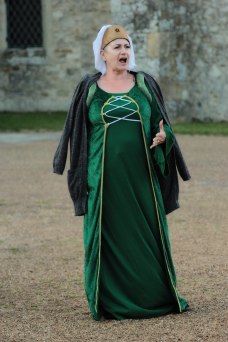 Tickets for The Merry Wives of Windsor can be bought from Carisbooke Castle’s admissions desk or by phoning 0370 333 1183, and will also be available on the door.

N/B: The performance is open-air, and audience members are advised to bring their own chairs for maximum comfort! The performance will take place inside if the weather turns!