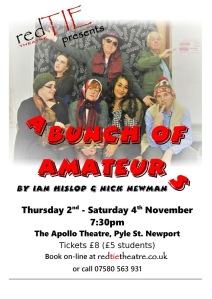 Take a tiny Suffolk amateur theatre group threatened with closure; add a last-ditch attempt to save it with a production of ‘King Lear’, featuring a celebrity, and mix in a conceited Hollywood has-been who somehow believes he has been invited to perform in Stratford on Avon, not Stratford St Mary, Suffolk, and you have the premise for this hilarious play, co-written by Ian Hislop.

In the hands of the Stratford Players themselves it could have been a bit of a shambles, but RedTIE are made of sterner – and more professional – stuff, and their production captures every bit of humour in the script while featuring some delightful characterisations.

The lynch-pin of the Players – director, driver, tea-lady and The Fool – is Dorothy, brought to life perfectly by Helen Reading, while Rod Jones plays the pompous Nigel, resentment brimming from him at losing Shakespeare’s plum role to an American actor who would clearly be far more at home in an action movie. Steve Reading’s Jackson Steel commands the stage from the moment he bursts on, addressing the paparazzi to his final mellow acceptance of amateur theatre as a force to be reckoned with.

The speech that will resound in the ears of any am dram enthusiast, explaining why we do it, is given to Mary, played with such panache by Helen Clinton-Pacey that she was at times in danger of stealing the show from the rest of this talented cast.

Simon Lynch as Dennis, who casts himself in the role of Steel’s ‘entourage’, created a wonderful comic character – his various suggestions for portraying the scene in which Gloucester’s eyes are gouged out are memorable!

Special mention must also be made of the directors, Maggie Cardew and Eve Fradgley, who doubled as extras and stage hands, making most of the scene changes flow very smoothly, and the sound and lighting team of Amy and Dan Burns whose timing was perfect, notably with the sound of a nail gun going off – I for one jumped!

If you are looking for a really entertaining piece of drama, you could do far worse than to go along to the Apollo Theatre this evening (Saturday) to catch the final performance of ‘A Bunch of Amateurs’. From the applause and comments after the show, last night’s audience would agree.