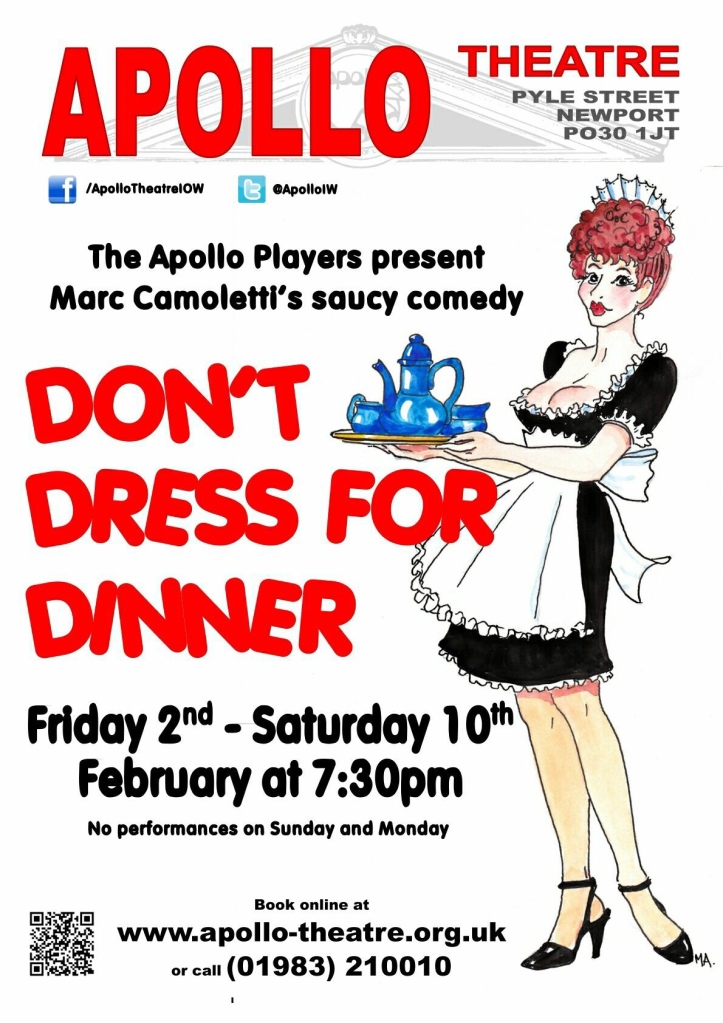 The play is billed as a ‘side-splitting comedy’ and the audience which packed the Apollo on Saturday evening would not disagree with that – there was continual giggling punctuated with bursts of loud hilarity and at a couple of points, spontaneous applause during the performance.

If audience approval is not enough to convince you to come and see this traditional farce, I would cite the clever script which twists and turns so that at times even the audience can start to lose track of who is pretending to be whom, and for what purpose – let alone the poor characters. ‘I’ve never been so many people, having so many affairs with so many different men in one night,’ laments Suzette, played beautifully by Rose Kelsey. ‘It’s nice being so popular….’

The basic premise is that Bernard (Steve Taverner) intends to take advantage of his wife Jacqueline’s absence over a weekend to host a little soiree of his own – the first problem is that she finds out he has hired a caterer, forcing him to ‘admit’ he has invited his best mate Robert over – which strangely provokes Jacqueline to cancel her visit to her mother – but why?

The second problem is that two women, called respectively Suzanne and Suzette, arrive – and are confused with each other by the hapless Robert, played with aplomb by Pete Harris: his “explanation” of what has gone wrong towards the end of the show is one of the highlights and is a testament to his ability to master a long and involved speech.

Suzanne, played by Nessa Law, initially strikes one as the archetypal bimbo, but she too has more to her than at first appears, especially her reaction at being pressed into service to cook the dinner.

Steve Taverner’s Bernard is suitably perplexed and frustrated as events spiral out of his control; he handles several slapstick comic moments and has to change shirts so often he runs out! Chris Turvey’s Jacqueline is a lovely foil for her stage husband, at once the suspicious wife and the schemer with secrets of her own.

The plot climaxes with the arrival of George, the husband of someone – but no one quite seems to know who. John Abraham, as George, exudes the appropriate level of aggression. ‘Is she finished?’ he asks, referring to his wife. ‘I think we’re all finished!’ exclaims Robert.

If you fancy a good laugh and an entertaining evening, ‘Don’t Dress for Dinner’ plays each evening from Tuesday 6th to Saturday 10th February inclusive, curtain up at 7.30pm.

Tickets are available from http://www.apollo-theatre.org.uk/dont-dress-for-dinner/ – but get them quickly – they are selling out fast!