While audiences exclaim over the acting talent onstage (at least, we hope so!), one area of theatre that often gets overlooked – especially amateur theatre – is the skill of the wardrobe department.

While some productions rely on actors finding/making their own costumes, we are lucky enough on the Island to have some amazing costumiers. The Apollo Theatre would not be what it is without Peggy Harcourt and her wonderful team who provide seven plays-worth of costumes annually, on a small if not non-existent budget. They have the most amazing memories for what is ‘in stock’ and can size an actor up at a glance, pronouncing: ‘That mustard coloured Edwardian gown would suit your character and would fit – it might be a couple of inches short but we can put some lace round the hem…’ – and they are never wrong!

Then there is Andrew Jenner-Wilson – a professional costumier ‘by trade’ who is not only an immensely talented actor, singer, set designer and director but who also possesses that magic needle which can effortlessly produce six full Victorian maid costumes, complete with aprons and caps – overnight! And tell him the dress is a bit tight in the waist, and he will disappear with said dress for about ten minutes and hey presto – it fits perfectly!

As any actor will testify, putting on the costume brings you right into the character, and also as anyone will tell you, costume changes – especially quick ones – are the bane of an actor’s life. You think it all looks calm and peaceful onstage? Just look in the wings during any play, and you’re likely to see an actor struggling out of and into costumes, aided – if they’re lucky – by an available stagehand or, if really lucky, a dresser.

I was asked to be dresser for last year’s Bembridge production of ‘Farndale Townswomen’s Guild Production of A Christmas Carol’. The fact that three dressers were needed for five characters tells you something, but the ‘organised chaos’ backstage, as every character had to change costume almost every scene, had to be seen to be believed. I am just thankful that I was working with very calm, experienced (as well as talented) and understanding actors – thank you Martie Cain and John Hammond!

My own favourite costume? Has to be the gown I wore for ‘Return of the Musketeers’, a memorable production for so many reasons. First, the slightly weird ‘casting call’….

I had met the lovely Patrick (Patch) Barry during a previous show when he had mentioned he was writing a play based on the Musketeers, and would I be interested in being involved? Yes, I said. I heard no more for several weeks, until I was filling up my car one day, when Patch’s face suddenly appeared round the side of the petrol pump. In the manner of a James Bond spy passing secret information, he merely said ‘Spider Sister Number One?’ I said yes – not sure what I was actually saying yes to – and he disappeared, leaving me wondering whether this was some kind of code, or the name of an actual character.

Thankfully it turned out to be the latter. The next memorable event was the first rehearsal. I turned up early not quite knowing which building I was looking for in a Sandown back street – but I decided I must be in the right place when I turned a corner to find two men (whom I now believe to have been Jason Harris and Olly Fry) armed with swords apparently engaging in a duel to the death. Any sane person would have walked quickly back they way they had come….

Olly and Jason were just two of an amazing cast I was privileged to meet and work with on that show: almost all I have worked with again since and most are now really good friends. But the costumes: they were amazing. This time the costumier was Tony Spurling-Wright’s Costume Workshop, and I was allocated a gorgeous blue seventeenth-century pannier gown – that’s the one with a skirt about six feet wide, held out by a frame tied round the waist. With the gown and my hair arranged in a suitable style, I felt not only historical but elegant. 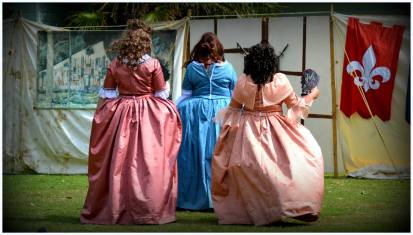 Elegant, that is, until we all trooped across to Los Altos Park for publicity photographs. It was fine on the way – in fact, the sight of twenty or so Musketeers and their ladies perambulating through the streets of Sandown literally stopped the traffic: especially as we negotiated a very twenty-first century zebra crossing, pausing half way across for the gentlemen to salute drivers with a low bow, while the ladies sank into a curtesy.

The problem came once we reached the park and I realised I would have to walk between two trees to get to the clearing where the photos were being taken. There was nothing for it – I had to turn sideways and crab my way through. My only solace was I wasn’t the only one!

This is the 7th in a series of “Raising The Curtain” posts, thank you Maureen!

Please also do check out #6 in this series of blogs, where Olly Fry also takes us behind the scenes of Adlib Theatre Company’s  “The Return of The Three Musketeers”.

If you would like to share an Island theatre story, to reminisce, let us know. We look forward to sharing your contributions.